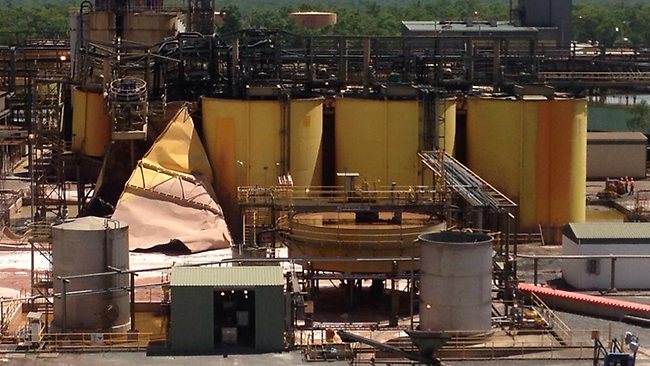 PICTURE EXCLUSIVE: This photo shows the extent of damage to the tank that spilled up to 1million litres of radioactive slurry at Ranger uranium mine. Source: NT News

Australia’s Ranger uranium mine, operational since the last 33 years, has recently attracted a suspension by the federal government. This penal situation emerged when one of the leach tanks of the mine cracked to leak more than 1 million liters of radioactive slurry near Kakadu National Park. Just in one hour of this massive leak, some critics started to quote this incident one of the biggest case of non-compliance in Australian leaks history. Fortunately, no injuries have been reported so far but the safety concerns are far reaching.

Though, this was the jurisdiction of Northern Territory Government but the federal investigation was launched keeping in view of the intensity of this breach. The Environment Minister, Greg Hunt, categorically condemned this incident and has asserted that the incidents like this would be “unacceptable” for Australian Government. Then, the protest demonstrated by the Australian Conservation Foundation and Environment Center NT on Monday at ERA’s Darwin Offices (pictured in below) led the federal government for an immediate halt on mining operations. 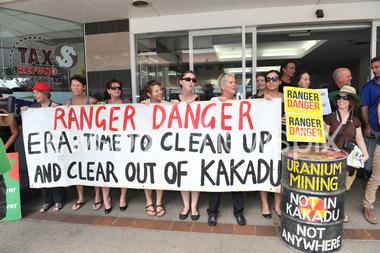 DECEMBER 9, 2013: DARWIN, NT. Members of the Australian Conservation Foundation and Environment Centre NT protest outside the Energy Resources of Australia…

Despite the mine’s operating company, Energy Resources Australia, attempted to dilute this tense environment by defending that “multiple containment systems” resisted against this spill to show any hazardous effects but this argument could not justify their regulatory leaks.

This even has left the local Mirrar Clan with fury and the chief executive of their representative organization, Justin O’Brien, said, “There is nothing but a hillbilly operation, run by a hillbilly miner with hillbilly regulators”.

“Obviously there has been failure in their maintenance program and that has put the workers at that mine site at risk”.

With no cynical intentions, if the facts are scratched up, more than 200 incidents of leaks and safety breaches have been reported so far about Ranger (A few of them has been shown below in picture). Are we really ready to give them a chance, still? This question remains at the heart of all debates across all stakeholders, including the local community of Kakadu Park who seems frightened now.

In 2014, we all should hope to head towards a safe future, should we? 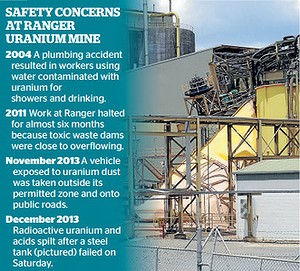