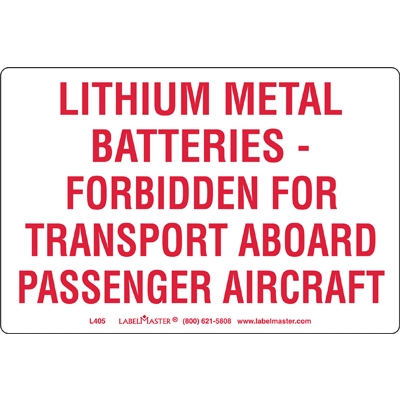 The safety hazards associated with the air freight of lithium metal batteries are still in place, reiterates ICAO recently. A Dangerous Goods Panel review meeting in Montreal during the upcoming week may spur on heated discussions in the aftermath if the proposed ban on the transport of lithium metal batteries from passenger and cargo aircraft receives a final approval. It is also noteworthy that the 2013-14 Technical Instructions have already excluded exceptions for “bulk shipments” of lithium batteries. But what’s still apprehensive? And what could be the repercussions if the ban be enforced? For knowing the answers, let’s cross examine the narratives and counter-narratives in this regard:

What DGP Have to Say?

· No fire suppressant systems could be validated effectively in the lithium metal batteries packages against fire. Though, Halon is instructed for safety but this still does not reduce the risk.

· A general duty of care is seriously missing among the lithium metal manufacturers and freighters. Whether it be about the production of counterfeit batteries or the defiance by lithium metal batteries shippers, deliberate violations are noticeable and unacceptable.

· Even with the stern enforcement of compliance, the desired safety would still be unachievable because of the absence of demarcation between compliant and non-compliant shipments and standard and substandard lithium metal batteries.

· The growth trends in demands for lithium metal batteries and the subsequent increase in shipments would place us in a more vulnerable situation in future.

· There are precedents from one State and many airlines that underpin our proposal.

· A sharp rise in the transportation of lithium metal cells by sea is encouraging and should be a safe alternative.

A Rebuttal by Manufacturers

· It would be an unfair disparity between compliant and non-compliant manufacturers of lithium metal batteries.

· The provisions regulating lithium batteries have been subject to amendments repeatedly, and we’re already coping with compliance pressures, still even doesn’t this suffice?

· We must keep in mind, who could be affected by the ban? The implications would be far-reaching: Life-saving medical and implantable medical devices, defense apparatus, electronics, information technology, communications, public safety, and other industries all are dependent on lithium metal batteries. Are we simply ignoring them in this ban-supporting argumentum?

· And how about the overnight shipments? Can you suggest a replacement?

· Why can’t we adopt further testing measures for increasing compliance rather to penalize all?

Safety matters but a holistic view is also essential.

What do you suggest?

a) Ban is justified

b) Ban is not justified