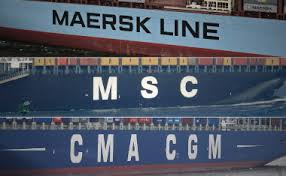 The shipping media, these days, is abuzz with taglines underscoring the Global P3 Alliance Summit due on 17th December. The maritime regulators from the EU and China will join the discussion orchestrated by the Federal Maritime Commission (FMC) in Washington DC. The fascinating plan tabled by three titanic shippers, Maersk Line, CMA-CGM and Mediterranean Shipping Co (MSC), of this extended alliance within the global sea transport industry will be the only focus of this regulatory summit. This has started to make waves within the global shipping industry which is evident from the dissenting shippers’ questions.

GSF writes to the EC

The Global Shippers Forum (GSF), while voicing the shippers from all over the world, has raised the issue with the EC recently when questioning this monopolized alliance through the defense of competition law and the commercial polarity.

“We have raised these questions with the European competition authorities on behalf of shippers from all over the world because they are rightly concerned about the market impact of the P3. The question on every shipper’s mind is- what will be the impact on my rates and the quality of services?”

Pointing towards the monopoly inherent in this alliance, Mr. Welsh added

“Shippers are rightly worried about the potential of the P3 to eliminate effective competition in the world’s main liner trades. We therefore need an in-depth assessment of the P3. That’s why we are asking the European Commission to provide us with the essential details of the P3 and to confirm whether they have started a formal investigation or intend to do so. We need information and answers so that the GSF is in the position to protect the commercial interests of shippers internationally.”

It is important to mention here that EU has already commenced investigating several shipping lines for breach of antitrust laws. However, no one could be found guilty so far.

Since the proposed alliance network aims to cover the routes from Asia to Europe as well as transpacific and transatlantic routes to the United States, GSF finds it a regulatory omission particularly in Asia and the United States neglecting their market share.

How FMC views this alliance?

Since the summit will examine the regulatory challenges of this massive carrier alignment, including carrier alliances, vessel sharing agreements, and the effects of international agreements upon international sea trade, FMC also has shown concerns regarding the control corners and competitive environment within the global shipping industry. However, FMC has optimistically that this alliance would serve to lead us towards a strengthened relationship between maritime carriers.

“One of my concerns relates to media reports that a combined east-west fleet of 346 vessels will be reduced to 225 vessels once the proposed Alliance is consummated. I am interested in learning more about the impact this Alliance will have on services provided to consumers, shippers and US terminal operations”. Adding further, he remarked, “Maersk Line, Limited is the largest U.S.-flag carrier in the international fleet. To this end, I do not want the Alliance’s operations to harm of otherwise negatively impact the U.S.-flag international fleet when decisions are made to cascade or otherwise eliminate ships from service”.

Keeping in view the concerns of global carriers, FMC has also invited carrier associations and carriers from Europe and China to join this summit.

What goes in favor of the P3?

Drewry Report has drawn positive conclusion for the P3 Network. Then, a London-based consultant has indicated that this network will build the capacity of other shipping companies by providing them with an option to avail the alternative routes for avoiding heavy traffic flows. This has already been reported that this alliance would reduce carbon dioxide emissions by 40% .

Still, if the questions raised by the GSF could not be addressed, this can turn into a serious divide between regulators and shippers. But we should hope that the maritime regulators will definitely consider both perspectives and will come up with a balanced approach.